There's a berner in my living room! 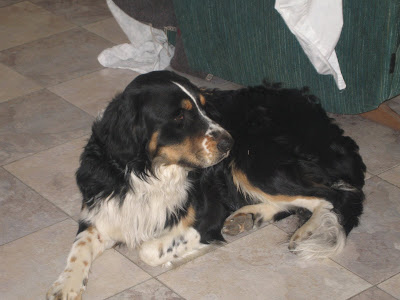 HE, yes I said HE, stopped by this morning for breakfast. I had just finished cooking bacon and I hoped the smell would be irresistible. I left my door open and stood behind it. After he finished the kibble he came through the door and I closed the door behind him.

He didn't panic until I opened the door to let Stumpy inside. I leashed him first and when he realized he wasn't going out he panicked, but calmed right down as soon as the door closed.

He is soooooooooo skinny!!! He should be an 85 -95 pound dog. If he weighs 60 pounds right now i would be surprised. I haven't checked to see if he is neutered, but he does have one of the pieces of extra equipment that make him a boy. He's probably 2 or 3 years old.

He allows me to approach and pat him, but doesn't come to me; it doesn't matter what I do to encourage him.

More pictures after I recharge my camera battery.

Brenda? Did you measure that dog door?

Norwood, I know I promised you the next post and i don't want you to feel your less important than this berner boy, but everyone was worried about this guy, so I wanted to let them know he is safe and in my custody.
Posted by Cyndi and Stumpy at 8:54 AM

Woohoo! Let's hear it fur the bernHIM in the living room! My BMD furiend Baloo is 90# so I undersstand this one needs a wee bit-o-weight!

Whew - so glad you got him!

Ya Berner is getting to know you better. Stumpy you need to lighten up a little bit.. Berner isn't going to hurt Mom.. We know how jealous ACD's can be...

Hey sweatheart, Stella has been trying to comment on your blog all day and she asked if we would ask you to drop her a line to her email..

Wag wag wag.. so excited he's in your house Stumpy!!! i think he knows who luvs him! nice trick with the bacon.. look out.. i'll be behind you next!

Stella!!??!! Where are you? I am sorry blogger won't let you comment! I don't know why that is but I left my email in your comments. giantspeckledchihuahua(at)live(dot)com.

Khyra, the way he WANTS to eat he will gain the weight back in no time. Taking it slow, though, until we see how well he handles food.

DG, I did, but he isn't particularly happy about it!

Heelers, Stumpy just wishes he wanted to play. she's only really bad about her toys and food (until I get on her)I left my email on Stella's blog. Weird that blogger isn't letting her comment.

Tula, I didn't cook the bacon with the intention of luring him in the house. Bacon is world renowned for it's magical curative powers,though. I didn't share my bacon with him, but I would make bacon cookies for you!

So glad you got this guy - now what are you going to do with him? Keep him, I hope! :D

Stumpy
That is crazy.. mom is fascinating with your feral dog packs. This guy.. huh? I smelled your bacon and headed your way but mom stopped me. I"m glad he's friendly or I'd have to come and go cracker on him. Now please.. tease me just once and show stumpy again. The berner shouldn't steal the whole blog.
norwood

Sam, I really can't keep him. I have contacted the regional BMD rescue and am working with them.

Norwood, your post is up. Don't worry about this berner boy taking your place in Stumpy's heart. He is B.O.R.I.N.G!!!! He has two things on his mind: breaking out of here and ummm...well, the other one is x rated. Stumpy is having no part of that! She want's a dog she can go crackers with, one that can keep up with her zoomies, if not out zoom her... know anyone?