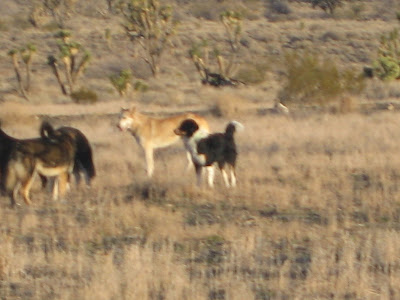 The berner girl was coming around every day or every other day; having a bite to eat, drinking and sometimes sleeping in Stumpy's chair. She still wouldn't let me get close. But she was looking healthier, more relaxed and seemed to have more energy. Her tail was flying high and she trotted up the street. 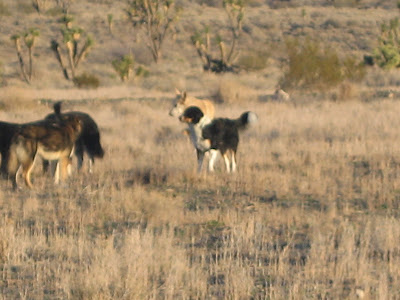 I hadn't seen her since the weekend and she hadn't been by to eat for a few days. 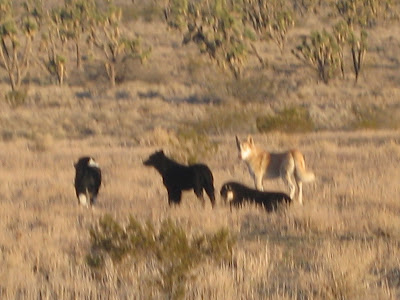 Today, on my way to the food bank I spotted her with this crew. 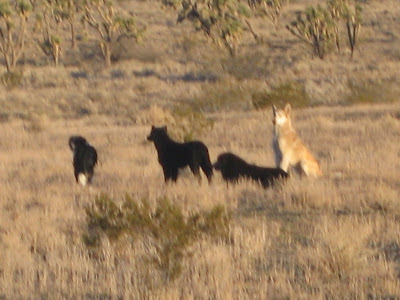 This pack is one I am not familiar with. They were over close to where the cows and calves had been last week. Not good... 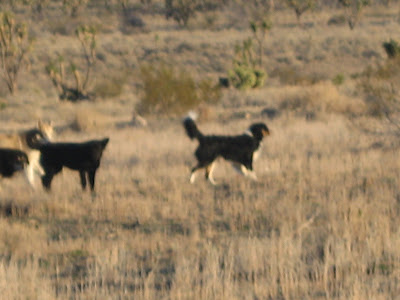 Close to that same area a friends dog was nearly killed by yet another pack of dogs, earlier this week. That same pack had killed a calf recently. 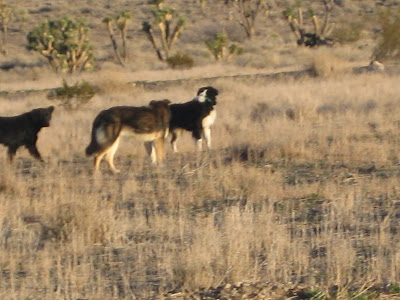 The ranchers are actively seeking feral dogs and shooting to kill. 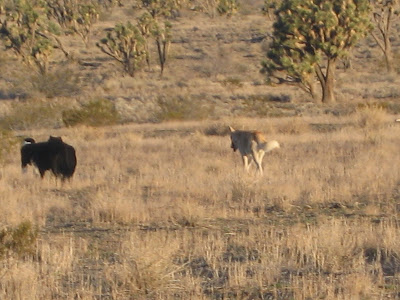 That makes 4 packs of feral dogs running in a relatively small area. The pack that tore up my friends dog included 4 puppies. 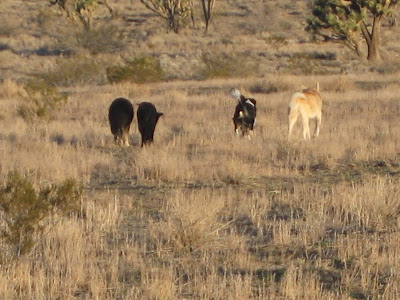 Do you see the size of that malamute-looking dog!??! CRIMINY!!!

I'd guess the berner dog to weigh around 85 or 90 pounds. Although, it's hard to say under all that coat. I can't fathom how much that big malamute weighs.

If she comes around this weekend, I am going to step up my game. I'll befriend her after I get her caught. I don't want to scare her so badly that she is afraid to return.

I also don't want her bringing her friends by for dinner or a sleepover.

Dirtville is a dumping ground for unwanted dogs. It's also the home of several hoarders. I know of three that keep over 40 dogs in unhealthy conditions with no thought of spaying, vaccinations or even the ability to feed them.

Because Dirtville is not an incorporated town, the county takes responsibility for everything, in theory anyways. Really, they like to pretend we don't exist out here.
Posted by Cyndi and Stumpy at 5:15 PM

We'll send Sibe Vibes fur her and the others -

The stunning light one (hard to tell if that is light red or cinnamon/sugar) looks like my Banshey (ex has her) - she's a big Sibe girl although we think she has a wee bit of wolf in her based upon her gait, her howl, and her temperament -

We've been wondering how the Berner was doing -

What a shame. We really don't have a feral dog problem here, so it's hard to imagine what it's like. I bet it can be both devastating and scary.

I hope you can catch this girl and get her on the road to a better life.

I actually heard the story about the feral beagles. I believe a lot of them were captured and adopted (the second link won't open for some reason).

Here, though, it is very rare that we see a stray dog, let alone a pack. Maybe it's just my neighborhood though.

We DO have a cat problem here. I've tried to get people to help me out so we can get them spayed and neutered, but it never materialized..

I wonder how you will catch the Berner? If they are killing cattle, they are well fed and not very interested in kibble, I wouldn't think. I admire you for doing this, but don't want to see you get hurt!

Khyra, it wouldn't surprise me if the big red dog had some wolf. I thought malamute, originally, because of his size. but he looks to be really light boned.

Sam, I hope those beagles have found homes. It'd be a rough windter on LI for those pups, for sure.

Stella, All I can do is try and hope. She doesn't seem to be as feral as the other dogs yet). And she was back in my neighborhood yesterday afternoon, without the rest of the dogs. It's pretty rare for the cattle to allow a dog (or human) near their calves so i don't think they get a lot of beef to eat.

Mom and I are horrified that there are that many packs of dogs running around! We hate people that dump their dogs!!!